What's on your mind?

they need to improve their page

A video from Brandon Tenold - a Canadian YouTuber who uses his channel to review cult movies from around the world; be it giant monster movies, sci-fi, fantasy, horror, etc. and regardless of whether they're good or bad.

For me, I quite enjoy his sarcastic tone and snarky humor although your own opinions may differ.

Hope you like what you see, even if you disagree with him: https://www.youtube.com/watch?v=QRuz-wjvI1E

Let's sing the entire thing together! Including the music!

No one would have believed, in the last years of the nineteenth century, that human affairs were being watched from the timeless worlds of space. No one could have dreamed we were being scrutinized, as someone with a microscope studies creatures that swarm and multiply in a drop of water. Few men even considered the possibility of life on other planets and yet, across the gulf of space, minds immeasurably superior to ours regarded this Earth with envious eyes, and slowly and surely, they drew their plans against us.

The mysterious person who bought the egg at the end of the Crystal Egg finds out about it's properties, the British Intelligence gets involved, and they discover the Martians are planning an invasion of Earth, leading to a War of the Worlds Adaptation.

Other ideas include it being the first part of a quadrilogy along with War of the Worlds, Massacre of Mankind and Star Begotten

I really hope Steve listens, because this sounds quite cool.

In 2005, aliens attacked Earth. A man named Ray Ferrier ran with his kids and survived the attack. Bacteria took them down.

Now 20 years later, Robbie and Rachel have grown up, and joined the upgraded military. Humanoid bacterial life-forms have become super-soldiers, and Ray has retired. The aliens attack, and after it's repealed, the humans counter invade the world. Can Ray, his kids, and humanity survive? or will the aliens have their revenge?

In the George Orwell novel Nineteen Eighty-Four, we witness a dystopian and totalitarian future.

To quote Wikipedia, "much of the world has fallen victim to perpetual war, omnipresent government surveillance, historical negationism, and propaganda. Great Britain, known as Airstrip One, has become a province of a totalitarian superstate named Oceania that is ruled by the Party, who employ the Thought Police to persecute individuality and independent thinking.

Big Brother, the leader of the Party, enjoys an intense cult of personality despite the fact that he may not even exist."

For more information about how the world functions, here's the link to the page that explains the "Setting" in detail: https://en.wikipedia.org/wiki/Nineteen_Eighty-Four#Setting

My question is, what if the Martians made their first invasion on this version of Earth in the aforementioned 1984, with their invasion been global.

While the Martians would ultimately still be felled by Earth's bacteria, do you think their presence and actions would result in the downfall of Big Brother and Ingsoc (as well as the respective Parties in Eastasia and Eurasia) or only empower them?

Curious to see what you guys think.

TBH it would be Extremly hard to watch :( 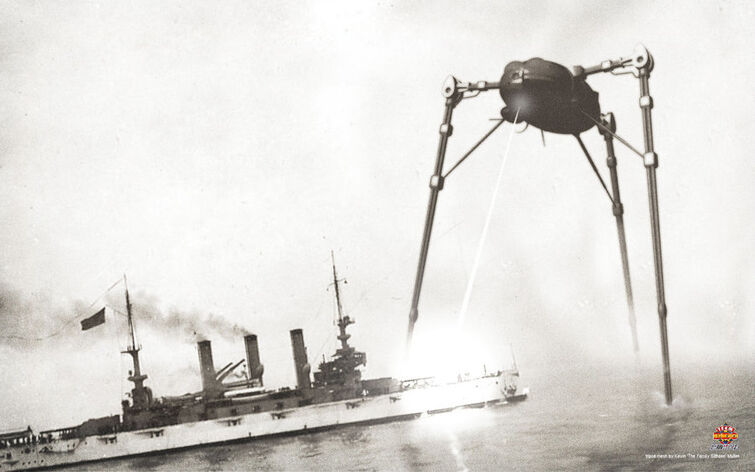 Assuming that the attack in 1899 was the only one and only Britain was affected like in the book, do you think humanity would try to make peace with the Martians (assuming the Martians were still around at this time)?

Or, do you think the scars of the past would prevent humanity from attempting peaceful contact (or worse, actively trying to wipe the Martians out)?

Curious to see what you think of this.

Please say what you think 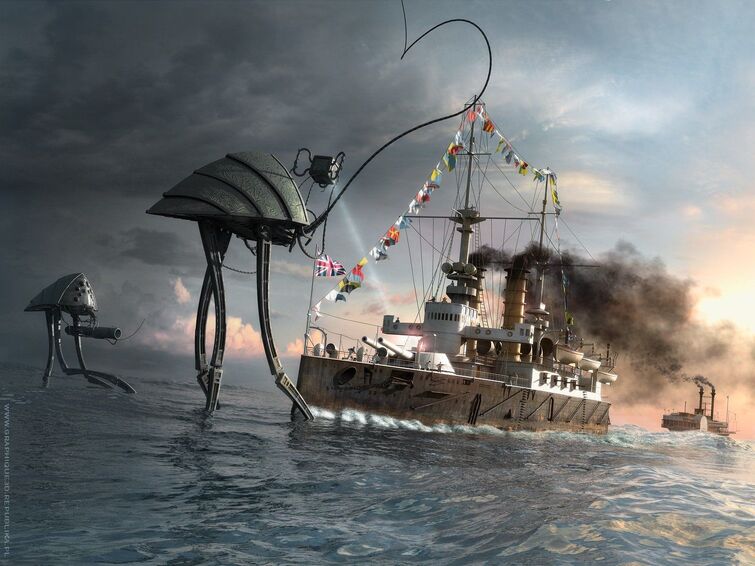 If you remember this, you deserve a veteran's discount. 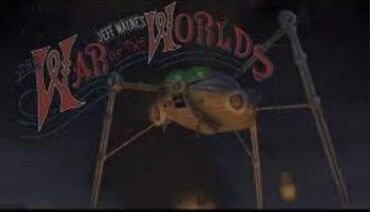 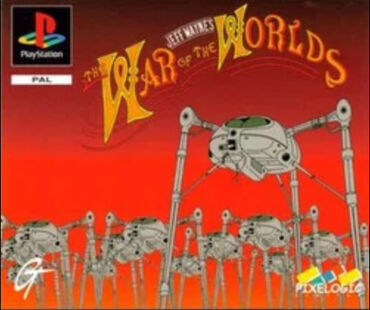 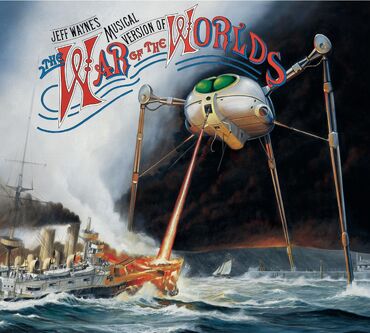 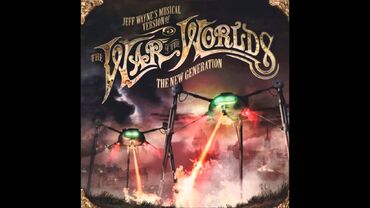 The following is all entirely your opinion so feel free to fire away.

For my own idea story (which I'll call War of the Worlds: Renegades), I'd say that when the first War of the Worlds ended with the defeat of the Martians thanks to Earth's bacteria, the Martians would still set up a new base on Venus whilst starting "harvesting" missions on asteroids in the Solar System to get what they need to survive without fear of attack or disease.

In the meantime, they begin experiments with their own biology to try and get around the issue of illnesses, whilst also upgrading their current technology and working on new weapons, technology and methods of war to prepare for the potential day that Britain and/or other nations on Earth launch their counterattack.

In the years that follow, humanity does make significant advances with some of the Martian technology - including the secrets of supersonic flight, the creation of new alloys, the proliferation of Red Weed as a substitute fuel source and the successful construction of working Heat Rays. However, some of it ultimately remains a mystery to even the best scientists - including the Viridigen gas, the black smoke and the arrangement of the crystalline wafers in the Digging Machines that would otherwise aid in the future development of automated machines.

By the 21st century history has mostly played out like before, with both World Wars, Britain's Empire breaking apart and other nations becoming more powerful - discovering alternative technology/weaponry that partially or completely nullified Britain's earlier advantages granted by the Martian tech.

Meanwhile on Mars, the Martians have greatly upgraded their technology - with spacecraft capable of hiding from humanity's methods of detection making journeys to Earth to abduct humans for use in their experiments. With attempts to immunize their current bodies against the diseases of Earth proving futile, the Martians begin a new plan and use their vast intelligence to create a twin pair of human/martian hybrids (who I'll dub "Aries" and "Athena" for this bit) with the eventual goal been to re-invade Earth and turn themselves and the human population into Human/Martian hybrids.

However, while Aries and Athena have gained the higher intelligence and psychic power of the Martians and the ability for their bodies to fight off Earth's illnesses, they've also maintained their emotions and sense of humanity. Seeing through their psychic link with the other Martians, they witness the historical first attack on Earth and learn to their horror of the Martian's plans.

Using their newfound creativity and enhanced intelligence, the pair manage to take what they need (including the 'Master' Crystal Egg and details of the Martian's new weapons of war) before making a pitched but successful escape to Earth in one of the Martian's spacecraft - crash landing in the English countryside.

There, they're eventually found by the authorities after been taking in by an elderly couple - the twins working together with the British Government to help Britain and the world prepare for the invasion to come (a homage to the Austrians and Germans who defected to the Allies during WW2 when the Nazi Party took over).

So what about you guys? If you made your own sequel to the War of the Worlds, what would you do?

I just found a copy of the book, I never knew there were more drawing that alivm correa made! It kinda make war of the worlds a picture book. Sadly it’s in French, I only know English. We get illustrations of the handling machine, it looks just the the command module on the staturn 5! Here

Hi all! I have an awesome update regarding the Unified Community Platform (UCP).

As a reminder, the UCP is a new unified platform giving users the up-to-date MediaWiki experience including the latest features! More can be found here as a reminder.

What do you think of these updates? Comment below and feel free to leave questions on those blog posts so staff can respond! :)

I'm here to let you know that staff have exciting plans for the future of video on Fandom, including the future of what was Featured Video (FV) and what is replacing it.

A replacement for FV, titled The Loop, is set to be a mini-show that will be different for each vertical, highlighting the latest news from topics relating to that vertical. The best bit? These videos will use wiki articles and will encourage users to visit the wikis featured in the videos to find out more.

As a new episode of The Loop will be released weekly, you will see a wide variety of wikis of featured so there is every chance yours will be featured too!

Please see the latest staff blog for more details and feel free to ask me any questions!

Secondly, staff posted a blog about Fandom in 2019 and the amazing things achieved! Here's to a great 2020. :)

Help us grow War Of The Worlds Wiki