War Of The Worlds Wiki
Register
Don't have an account?
Sign In
Advertisement
in: Martians, Aliens, Villains,
and 9 more

The Martians as illustrated from an early publication.

hoots and wails
The Martians (also known as "Molluscs" or "Sarmaks") are a race of aliens from the planet Mars, who tried to invade Earth when their own homeworld became an inhospitable, frozen desert. Despite their primitive appearance, their intelligence and technology far exceeded our own prior to the invasion.

The main focus of Martian anatomy is their brains. Although they do have a heart and a bulky set of lungs they lack any sort of digestive system and so they feed via blood transfusion from other beings; on Mars, these are humanoid creatures native to the planet, on Earth, human beings are used as a substitute.

Their reduced musculature system means that they don't need to sleep and in fact are constantly active.

Martians reproduce asexually by growing polyps on the side of their bodies, due to having no actual gender.

The Martians on Earth are eventually killed by earth-borne bacteria, of which their immune systems couldn't cope due to having destroyed diseases on their home world of Mars.

Little is known about the Martian language. They seem to use telepathy to communicate, and have very little spoken words. There is one exception: "Ulla" which is a form of war cry and it is uttered when the Martians are dying.

The fighting machines have been stated to hoot "Aloo!" multiple times throughout the story, however it is not clear whether it's the Martians communicating or simply the machines automatically doing so.

The live-action version of the Martians first appeared onscreen in George Pál's adaptation of The War of the Worlds. In this version, their appearance is rather unusual; they do not resemble the squids from the novel. They are short Reddish-brown creatures with long arms with three fingers that have suction cups on them. they have a large eye that has three colored lenses, which are red, green, and blue. they appear to have no mouths.

Although the bottom part of the Martian is never depicted in the film, The subsequent TV series shows that they have 2 legs with 3 toes per foot. A more simple description would be that the Martians are bipedal.

They walk awkwardly, but don't seem to be greatly hindered by Earth's gravity, unlike their predecessors. These aliens are depicted as being unaccustomed to any form of bright light, and as such, are only seen in the dark. They appear to have no use for humans. The Martians also appear to be colorblind, as shown in one scene that everything they see is green and purple.

Despite using similar Tripods the aliens in Steven Spielberg's adaptation of The War of the Worlds are not from Mars, but from an unknown planet, located in the dark corners of the Milky Way.

The shape of their bodies resembles their tripods, with the aliens having a large head and walking on three legs while having two smaller arms hanging underneath their bodies. They are also genderless and asexual and reproduce through growing polyp like offspring that grow from their bodies and slowly develop before falling off to continue their development into maturity.

The Martians from the Pendragon adaptation are the truest to the novel in appearance, and are the first on-screen adaptation of the novel to use Martians. They have many tentacles and rather elongated bodies/heads.

The Asylum Martians resemble green disks that have four tentacles acting like legs. The bottom of the tentacles have mouths that spit an acid that melts anything it touches. Inside the mouths are three tongues that resemble the fingers of the Martians from the 1953 film. They aren't specifically referred to as Martians in the film.

The Martians were recreated for the 1978 album of Jeff Wayne's The War of the Worlds Alive and for the live stage tours. They draw heavily from the H.G. Wells' descriptions, Jeff Wayne himself had great input into their creation.

The live stage tours give this incarnation of the Martians a motive for their invasion of Earth through an exclusive prologue; as a last resort after their attempts to stabilise their planet's atmosphere all but failed.

BBC's The War of The Worlds[]

The Martians from the War of the Worlds BBC miniseries are a bit different from the ones in the original novel. They are indeed sentient beings, but their appearance is much more arthropod-like. They have three legs (like in the Steven Spielberg film) ending in blades made of cartilage, and their heads have no discernible orifices apart from an extendable proboscis, though they're capable of guttural growling vocalizations. They feed directly on human flesh and blood with their proboscis, like how mosquitoes drink blood. They seem to be invulnerable or resistant to fire. They prefer to move slowly, but when healthy they're capable of surprising bursts of speed. They appear to have a sense of mourning for their own kind, as one Martian was seen nuzzling and mourning the corpse of a recently-deceased other Martian.

Several Martians emerged from their tripod at the empty mansion where the miniseries' main characters were sheltering, their presence initially remaining unknown to the humans for some time. They're responsible for killing each of the invasion period's main characters one-by-one in the final episode except for Amy. Beforehand, the characters observed the Martians were growing weak and sickly, to the point that one of them died, alerting Amy years after the invasion to the true cause of the Martians' deaths.

The Martians from the Great Martian War of 1913-1917 had a strange cephalopod/insectoid appearance, with four eyes.

In Superman: War of the Worlds, the Martians invade in the year 1938. Depicted as much more powerful than their usual depictions (likely to counter Superman's abilities), the Martian invasion begins at Metropolis with their advanced technology conquering the immediate area before the night ends, taking Superman captive after disorienting him with the Black Smoke and striking him with two Heat Rays.

Over the next three weeks, the Martians assumed complete control of the Earth, wiping out all the major governments as well as discovering that they could subsist off of human plasma. The Martians soon discovered that they were being killed off by Earth's bacteria and recruited Dr. Lex Luthor, their telepathic powers having detected his genius, to try and cure their "Earth flu." Another group of Martians studied the comatose Superman, trying to discover the secret of his invulnerability, unknowingly protected from Earth germs by Superman's Kryptonian bacteria.

When Superman awoke, he confessed to being an extraterrestrial with Luthor using that knowledge to isolate the Kryptonian antibodies that the Martians needed to replicate to survive. Though the Martians tried to kill the now useless Luthor, Lois Lane freed Superman who killed the Martians in the lab and prevented them from telepathically broadcasting the antibody formula. Though the Martians tried to kill Superman, he managed to slay them, though at the cost of his own life. Having previously deduced that the Martian Flying-Machines lost their hover capacity if they didn't have a direct line of sight with the ground, Luthor constructed a Gravity Negator that quickly ended the Martian invasion.

Wells' Martians are likely the basis of the modern theme of aliens and extraterrestrials being "bug-eyed tentacled monsters", such as the Rigellans of The Simpsons and the Daleks of Doctor Who.

The 1988 TV series retconned the origin of the 1953 “Martians“ as being from the planet Mor-Tax. In keeping with what we now know of other planets in our own solar system (and the improbability of Mars currently harboring native intelligent life), modern adaptations of War of the Worlds tend to use Mars as the staging post rather than the homeworld of the invaders who originate from a different star system altogether.

Martian from the 2019 BBC adaptation.

The Martian, facing George before killing him. 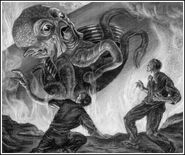 Martian Concept Art drawn by Ray Harryhausen for his Film adaptation of the novel.

Alien Concept Art for the 2005 adaptation by Steven Spielberg. 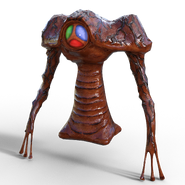 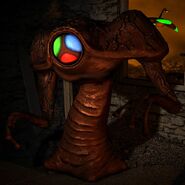 3D Model of the 1953 Martian with background.